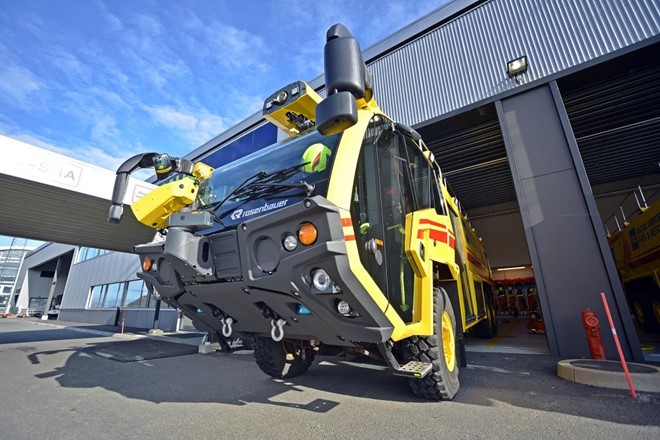 A mountainous landscape combined with a harsh climate and rapidly changing weather conditions. This is the new home of two PANTHER 6x6 S , which are stationed at Vagar Airport, the only airport on the Faroe Islands. Their task: Rapid and efficient assistance if an incident occurs at the airport. For this, they are equipped with the latest firefighting technology and extensive equipment.

The Faroe Islands is an archipelago consisting of 18 small islands in the middle of the North Atlantic. A rugged coastline with high cliffs, a harsh climate and an unspoilt landscape characterise this autonomous archipelago belonging to the Kingdom of Denmark. The gateway to the rest of the world is Vagar Airport, the only airport in the Faroes. It is located in the North Atlantic between the northernmost reaches of Scotland, the Norwegian coast to the east, and Iceland to the Northwest. Each year, around 4,700 aircraft take off and land at the airport. In addition, countless flights pass over the archipelago, due to its location on a much-used route over the Atlantic.

Adaptation to a new situation

Just a few years ago, the runways were extended and a new terminal and service buildings were opened. Prior to this, the airport was only scheduled to be served by smaller planes. Now, since the renovations, larger aircraft such as the Boeing 737-700/800 and Airbus 319/320 can land here. Accordingly, the fleet of the airport fire brigade was also renewed. With the two Rosenbauer PANTHER 6x6 S put into service in 2016, they have opted for two ultra-modern and very powerful vehicles. They ensure that swift and efficient help is not only available for scheduled take-offs or landings, but also in the event that a large airliner is forced to land at Vagar Airport during a transatlantic flight.

For the operators of the airport, it was also very important in choosing the PANTHER 6x6 S ARFF to have available a vehicle that easily copes with the requirements of the mountainous landscape. With a width of just 2.5 m, narrow streets and narrow passages can also be easily navigated by the two PANTHER S.

Both PANTHER S are powered by a 700 hp Volvo engine. The impressive performance (0 - 80 km/h in less than a half a minute) makes it possible to be present at the scene in a short time in case of an emergency. The R600 pump system , made of aluminum, in combination with a FOAMATIC A proportioning system , ensures that any fire can be combated quickly and efficiently. The extinguishing agent can be applied not only via the RM60C roof turret and the RM15C bumper turret, but also by two fast attack reels with 40 meter Formtex hoses. The generous tanks (9,100 liters of water, 1,200 liters of foam compound) are dimensioned so that large quantities of extinguishing foam can be produced in an emergency.

In regard to the various accident scenarios, both PANTHER 6x6 S are equipped with a range of optional equipment. This includes lifting bags, various personal rescue tools, extendable LED light poles and up to one kilometer of fire hoses. With both PANTHERs, it is possible to retrofit the vehicles at a later date with CAFS or a powder extinguishing system - this potential retrofit has already been taken into account in the vehicle's design. "We are very pleased with both the pre- and after-care. The equipment and service are impeccable, and we look forward to working with Rosenbauer for many years to come", summarised Jákup Sverri Kass, CEO of Vagar Airport.

The Rosenbauer PANTHER is doing excellent work in many airports around the world. Its robust and indestructible construction make it possible for it to defy the harsh conditions on the Faroe Islands in the North Atlantic, and reliably ensure the highest possible levels of safety.